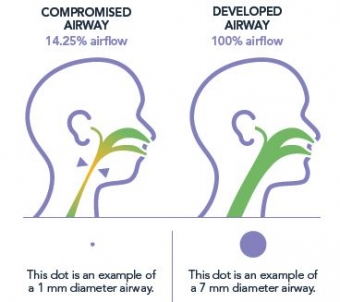 Sleep is a critical part of your child's development. At Toddlers to Teens Dental in Winnipeg, Dr. Mel McManus and his team of pediatric dentists use Airway Development and Sleep Wellness Treatment to treat the effects of Sleep Disordered Breathing in Children.

Sleep is critical to your child’s development – it is when the body grows, restores itself and the brain develops.

Sleep-disordered breathing or a blocked airway during sleep, decreases oxygen levels in the bloodstream and increases carbon dioxide levels in the front of the brain.

This area of the brain is responsible for complex cognitive behavior, personality, decision making, and moderating social behaviour.

SDB disrupts the balance of various cellular and chemical functions, and can cause implications for your child.

The effects of Sleep Disordered Breathing:

In a large-scale study of more than 11,000 children, kids with SDB were significantly more likely to exhibit behavioural and emotional problems, including hyperactivity, anxiety, depression, social issues with peers, and conduct problems (aggressiveness) ¹.

Children who exhibit aggressive or bullying behavior in school were twice as likely to have some form of SDB.

Children with sleep-disordered breathing were 40% to 100% more likely to develop neuro-behavioural problems by age 7.

Difficulties include executive functioning (ability to pay attention, plan ahead, organize, etc.), an inability to suppress behaviour, and the inability to self-regulate emotion or arousal.

Children who are not having full sleeps may not produce enough growth hormone, which can result in abnormally slow growth and development.

Disrupted sleep can cause increased nighttime urine production which may lead to bedwetting.

SDB and interrupted sleep has been linked to obesity.

The disruptions may cause the body to have increased resistance to insulin, or cause daytime fatigue which decrease you child’s physical activity.

Children may also experience an increased risk of high blood pressure or other heart and lung problems.

Pay attention to your child’s breathing during sleep. Do they snore? Are they mouth breathers?

Dr. McManus and our team at the Pacific Pediatric Sleep Wellness Centre cooperates with your doctor, and believes Airway Development and Sleep Wellness Treatment is the first step to correcting your child’s sleep patterns. 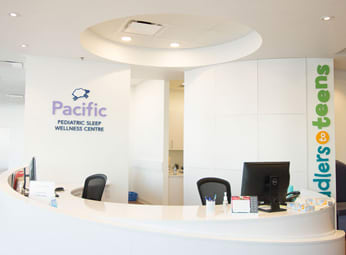 There are currently no posts available. Please check back.